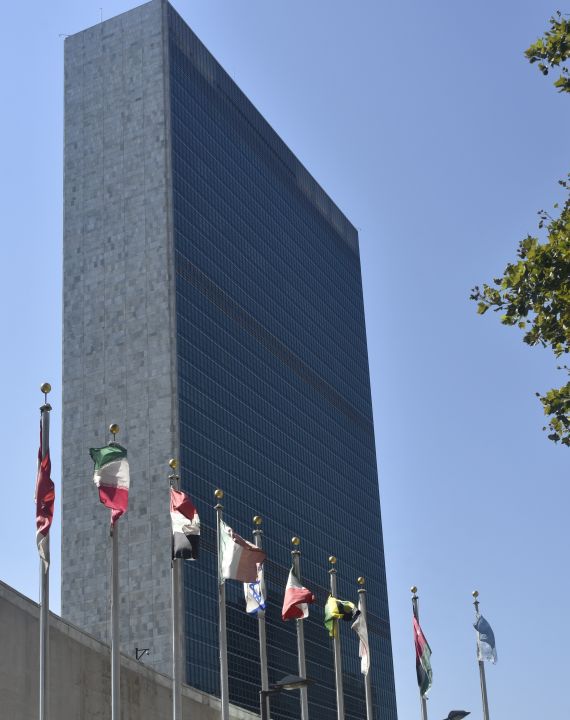 (The United Nations Headquarters in New York.
Photo Credit: Press and Communications Office of the Permanent Mission of Italy to the UN – NY)

On December 14, 1955, Italy espoused the United Nations Charter to become a member of the Organization.

Thus began a long history of collaboration, support and impetus for the activities of the United Nations, which is the logical consequence of the multilateral approach that distinguishes Italian foreign policy.

Italy participates in the UN’s activities with growing commitment, contributing to the pursuance of the Charter’s objectives, from maintaining international peace and security, to the promotion of human rights to sustainable development.

Over these decades, Italy has contributed with determination to the drafting of the General Assembly and Security Council resolutions that have made major inroads at the level of international law. The campaigns for a moratorium on capital punishment, gender equality and the rights of women and minors (not least against the practice of female genital mutilation and of early or forced marriages), against all forms of religious discrimination and in favour of freedom of expression are only a few of the concerns that place our country in the forefront.

Thanks to Italy’s unceasing efforts, it has been possible, with the passage of time, to narrow differences in position and broaden consensus on many issues.

Italy has also directly shared the burden of responsibility for the collective security having been seated seven times as a non-permanent member of the Security Council.

Over 60 years after joining the Organization, Italy’s contribution to achieving the objectives set forth in the Charter continues to be unconditional and appreciated. We rank seventh among the contributors to the regular and peacekeeping budgets and we are the top troop contributor among Western Countries to peacekeeping operations. Since 2006 Italy has participated in the UNIFIL mission deployed in Southern Lebanon. We host the third largest UN hub after New York and Geneva: from the Food hub in Rome –FAO, IFAD and the WFP headquarters – to the United Nations Humanitarian Response Depot (UNHRD) in Brindisi and the hub in Turin, where the UN Staff College, training center for the entire UN System, operates.

Several important UN agencies are headquartered in Rome; among them:

– the Regional Representative Office for Southern Europe of the United Nations High Commissioner for Refugees (UNHCR);

– the Human Resources Office for International Cooperation of the United Nations of Economic and Social Affairs (UNDESA).

Brindisi hosts the UN hub for logistical and humanitarian support, which comprises:

– the Global Service Centre, which provides logistical support to all the UN military and civilian missions. Its 25th anniversary was celebrated on the occasion of the UN SG’s bilateral visit to Italy in December 2019;

– the WFP Humanitarian Response Depot, from where the emergency first aid is dispatched to crisis-stricken areas within 24-48 hours.

Turin is home to the UN Training and Research hub, which includes:

– the UN System Staff College, tasked with the training and professional development for the UN network;

Trieste hosts the UN scientific research hub, which consists of:

– the World Academy of Sciences (TWAS);

Venice hosts the offices of:

– UNESCO’s Regional Office for Science and Culture in Europe;

– the WHO European Office for Investment for Health and Development.

UNICEF Innocenti has its offices in Florence.

Vicenza is home to the UN Centre of Excellence for the Stability Police Units (CoESPU) which is tasked with training the armed forces and police staff for peacekeeping missions.

For more information on the UN entities in Italy, click here.