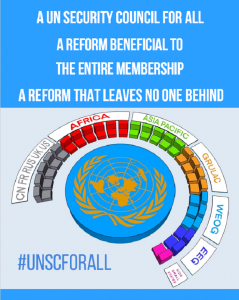 Today’s international scenario is profoundly different from the world order that emerged after the Second World War and the creation of the United Nations in 1945. The increasing, complex and new threats to international peace and security translate into a greater demand for an Organization like the United Nations, at the center of the international system, based on its rules and its founding principles. Italy’s action to reform theUnited Nations Security Council (UNSC) must be seen in this context.

The UNSC holds primary responsibility for the maintenance of international peace and security. Today’s SC consists of five permanent members with veto power (China, France, the United Kingdom, the United States, and Russia) and ten non-permanent members, who are elected by the General Assembly (GA) for two-year terms that are not immediately renewable. The non-permanent seats are divided up among the UN’s regional groups (three seats for Africa, two for Asia-Pacific, two for Western European and other States, two for Latin American and Caribbean States, and one for Eastern European States).

In 1945 the United nations counted 51 Member States. The only previous reform of the SC took place in 1963, when, following the increase in membership through the de-colonization process, the number of Member States increased to 117, and the non-permanent members on the Council grew from 6 to 10.

The United Nations today count 193 Member States, making the current distribution of seats on the Council geographically unbalanced and numerically insufficient for assuring proper representation of the entire UN membership.

The UN Charter establishes (artt. 108-109), that any reform of the Charter necessarily requires no less than 2/3 of favorable votes of the Members of the General Assembly and their ratification in accordance with their respective constitutional process (including all 5 permanent members).

In the early 1990s, the debate on UNSC reform gained momentum. The Inter-Governmental Negotiations (IGN) started in 2009, with the participation of all Member States. Since then, the negotiating sessions have allowed to identify important areas of convergence, as well as the persistence of differing views.

The areas of convergence include: the need for a significant enlargement of the UNSC, to assure a more equitable representation of all 193 Member States; the importance of addressing the under-representation of some regions (in particular of Africa, Asia-Pacific, and Latin America); proposals for improving the working methods of the Council, in order to make it more transparent and inclusive in its relations with the General Assembly, the other UN organs, Member States and the regional organizations.

Member States continue to disagree on two fundamental issues: veto power and categories of membership, i.e. the advisability of creating new permanent seats, with or without the veto, or instead enlarging the Council only through an increase in non-permanent seats. Differences on these two last issues are the main cause of the stalemate in the negotiations. Finding a compromise solution on these issues (veto power and categories of membership)  could give the negotiating process an important boost.

Within the Inter-Governmental Negotiations, Italy exerts the role of “focal point” of the “Uniting for Consensus” Group (UfC). UfC is a sizeable group of Countries, from every region, that share key principles, especially in opposing new permanent national seats. While the current status of the five permanent members is rooted in the historical circumstances following the end of the Second World War, UfC Countries are against any reform that would envisage the creation of additional and unjustifiable privileged positions within the international community, to the detriment of the general interest of the UN membership.

Consistently, and in the sincere effort to find an equitable solution that would enable progress in the negotiations, on the issue of categories of membership, the UfC Group has made various compromise proposals over the years. In 2014 UfC proposed a new formula (“intermediate approach”) based on the creation of new “long-term” seats, assigned to regional groups (not to single Countries), with possibility of one immediate re-election (today excluded by the UN Charter).

UfC believes that this formula could provide the basis for a solution that would satisfy the aspirations of Countries that wish to serve on the Council for longer periods, in the light of their growing international commitment. At the same time, it could offer all 193 UN Member States a larger rotation pool and thus a greater possibility of serving on the UNSC.

Italy and the UfC Countries will continue to engage in dialogue with all the other negotiating Groups, open to compromise, for the sake of contributing to a reform that will assure that the future UNSC is more democratic, representative, efficient and accountable toward the entire membership, true to the objectives explicitly shared today by all UN Member States. 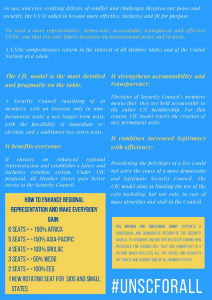 Ministers of the Member Countries of the “Uniting for Consensus[1]” Group (UfC) held a virtual meeting today to assess the status and prospects of the United Nations Security Council reform process.

The Ministers noted that, despite the persistence of diverging views on key aspects of the reform, the latest Inter-Governmental Negotiations (IGN) confirmed the commitment of the UN membership to work out the differences and build upon the elements of commonality with a view to reach a solution to this longstanding process based on the widest possible support.

Concurring on the urgent need for a reformed Security Council, UfC Ministers stressed that the IGN remains the most appropriate and effective forum on Security Council reform providing all UN Member States the opportunity to work together in an inclusive and practical manner.

UfC Ministers reiterated that the Security Council – the place where the ultimate decisions on global peace and security are taken – must be made more democratic, accountable, representative, transparent and effective. A Council “truly fit for purpose” would gain greater legitimacy in the eyes of the UN Membership, instill greater trust in the United Nations and strengthen the cause of multilateralism.

UfC Ministers therefore called upon all Member States to continue to work constructively to reach a fair and equitable compromise solution that meets the collective interest of all 193 Members of the UN.

Consistent with the Group’s constructive approach, the UfC Ministers agreed that, in order to help redress historical injustices, efforts towards a reformed Security Council should aim at achieving equitable representation for African countries. The reform should also ensure an enhanced representation and a greater voice for other developing regions, Small States and SIDS. Only by making the Council more representative of the 21st century would the Council become capable of addressing old and new challenges. Only in this way would all Member States be granted more chances to sit and serve in the Council.

At the same time, UfC Ministers confirmed their opposition to the creation of new permanent members in the Security Council: an effective and democratic Security Council cannot be achieved with the addition of new members with exclusive national rights and unequal privileges.

The Ministers reaffirmed the full commitment of the UfC members to engage constructively and in good faith in the next IGN to achieve a “Security Council reform for all”.