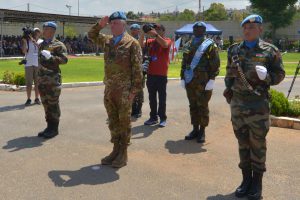 The Charter of the United Nations, signed on 26 June 1945, defines as the primary purpose of the Organization the maintenance of international peace and security. The work of the UN peacekeeping missions aims at this goal: 71 operations since 1948, in which hundreds of thousands of troops, police and civilian forces from over 120 countries have served peace and the ideals of the UN. More than 3,800 of them have lost their lives: a number that unfortunately continues to increase. Today, UN Peacekeeping activities have reached an unprecedented volume: 14 missions underway, more than 102,000 men and women in military and civilian service, for a current budget of more than 6 billion U.S. dollars.

In the last 10 years, the costs of peacekeeping operations and the number of blue helmets has increased almost tenfold. A phenomenon due to the multiplication of crisis hotbeds, but also to the growing expectations placed on blue helmets, whose duties and mandates are growing in complexity, starting with the task of protecting civilians. Since the second half of the nineties, after the tragedies of Srebrenica and Rwanda, the Security Council has started to equip peace operations with more robust mandates.

Italy and its armed forces continue to play their part. The first participation of an Italian contingent in a UN mission dates back to 1960, when Italy joined the United Nations Operation in Congo (UNC). The first peace mission in which the Italian Armed Forces played an active role was, from 1982 to 1984, ITALCON (under the command of General Franco Angioni) in the First Lebanese War. The mission was originally conceived as a UN initiative, but the veto of a Member state broke the international consensus while the contingent was on the way to Lebanon, so ITALCON was transformed into a mainly national effort, alongside the USA and France. The Italian intervention in Lebanon, based on respect for the local culture, impartiality, credibility and closeness to the civilian population, was a successful model which was also referred to in subsequent Italian and otherwise.

Today, our country is the first troop contributor, among Western countries, to UN peace operations, as well as the seventh contributor to the regular budget and peacekeeping budget. The UNIFIL mission, which operates in southern Lebanon to maintain a fragile peace in a region tormented by conflicts, was effectively commanded by an Italian, General Luciano Portolano, until July 2016, preceded by General Claudio Graziano and General Paolo Serra. On July 12, 2018, General Secretary Guterres appointed General Stefano Del Col as the new Head of Mission and Commander of UNIFIL.

The work carried out at the United Nations Humanitarian Response Depot (UNHRD) in Brindisi represents a further qualified contribution by Italy to the success of the peace missions. The Center of Excellence for Stability Police Units (COESPU) in Vicenza is also Italian: a training centre based on the model piloted by the Carabinieri during peace missions abroad, which trains police officers from all over the world to serve in peace missions. Even the first significant experiment in advanced technology in a peace mission has an Italian imprint: in fact, the Unmanned Unarmed Aerial Systems assigned to the MONUSCO mission (Democratic Republic of Congo), which contribute greatly to the difficult tasks of the blue helmets in the country and, in particular, to the mandate for the protection of civilians, belong to the Leonardo group.

Italy’s commitment to peace is also reflected in its support for the reform priorities identified by the Secretary-General to make the United Nations more effective, flexible and transparent: able to respond to the current challenges to peace and development by maximizing all the tools at its disposal and strengthening those of preventive diplomacy and political solution of conflicts. In this context, peacekeeping missions are also called upon to play a crucial role in peace-building. During its mandate in the Security Council, Italy has contributed to aligning peacekeeping mandates with these objectives by promoting principles of transparency, efficiency, accountability, strengthening the role of police forces in consolidating the capacities of Host Countries, reducing the environmental impact of missions, introducing new functions necessary to respond to hybrid threats to peace, training of blue helmets on human rights and gender equality in support of the Secretary-General’s zero tolerance policy against violence and sexual abuse, and intensified cooperation between the UN and regional organizations.

In line with the action taken in the Security Council during its mandate (2017), Italy launched in 2018, together with Bangladesh, a new Group of Friends for the management of the environmental impact of UN missions, with the aim of supporting the implementation of the Environmental Strategy developed by the Secretariat and to raise awareness among Member States and the various components of the UN system on the need for enhanced cooperation so that missions in the field can achieve objectives of effectiveness and sustainability in managing their environmental impact, thus also contributing to the efficient fulfillment of their mandates. 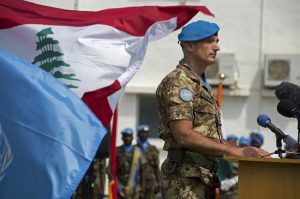 Italy’s commitment to peace includes a strengthened support for UN activities in the areas of peacebuilding and preventive diplomacy, which was recognized in Italy’s re-entry into the Peacebuilding Commission for 2023-2024.

Established in 2005, the Peacebuilding Commission is a consultative body linking the General Assembly, the Security Council and the ECOSOC in the process of outlining interventions in post-conflict contexts. The Commission meets at the level of the Organizing Committee and in five Country Configurations: Burundi, Central Africa, Liberia, Guinea Bissau, Sierra Leone. The previous Italian mandate in the Commission ended in 2018.

In the framework of the reform promoted by the Secretary-General, the Peacebuilding Commission is supposed to increase its central role, thus contributing to greater coherence of the Organization’s action in the three pillars of Security, Development and Human Rights and to the implementation of the Sustaining Peace Agenda and Agenda 2030.

Already in 2017, the Commission’s Organizing Committee provided an important platform for dialogue to address regional situations, such as the Sahel and the Great Lakes region, and cross-cutting issues, such as gender and youth policies. Italy, during its 2018 mandate, has actively contributed to the consolidation of this practice. Our Country also finances the UN Peacebuilding Trust Fund and the Secretariat’s Peacebuilding Support Office.

Italy has a well-established tradition in the field of promoting dialogue, which is reflected in the support at the UN for preventive diplomacy activities and the good offices of the Secretary-General, in its participation in the Group of Friends on Mediation, and in the effective work of mediation conducted by Italian civil society’s organizations in the main theatres of crisis. The engagement of the Community of Sant’Egidio in favor of peace in various African countries, from Mozambique to Burundi and the Central African Republic, is an example of this endeavor. 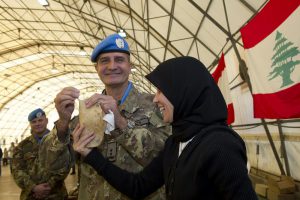